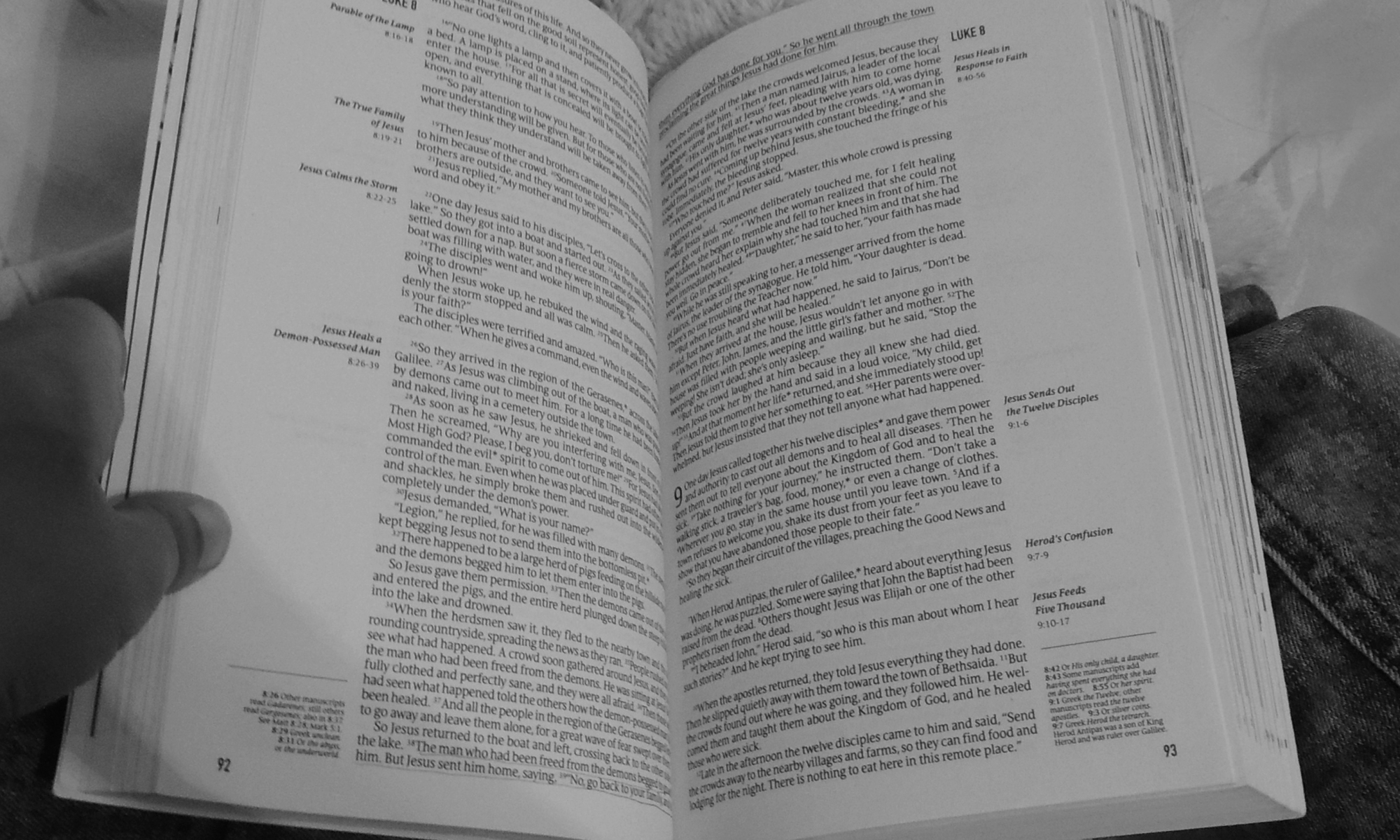 Lately, I’ve been reading from the New Testament in my devotions. I like reading about the life of Jesus because he lived such a perfect life. And by that I don’t mean that He had it easy. I mean that He was so connected to His Father that even during the most difficult of trials, He was able to overcome temptation.

I often hear phrases such as, “God accepts me the way I am” or variations of that sentiment. While I do believe that God loves us despite our sinful natures and despite our shortcomings, I haven’t read a time in the Bible when God asked someone to stay the same.

Throughout the gospels, Jesus calls His disciples and those that He interacts with, asking them to work for Him. There are many times when He says, “Follow me.” There are even times when He says, “Go, and tell others what you’ve seen.” But I don’t find a story where Jesus says, “Stay right here. Don’t change a thing. Keep living the way you’ve been living.”
John 8:10-11

Jesus straightened up and asked her, “Woman, where are they? Has no one condemned you?”

“Then neither do I condemn you,” Jesus declared. “Go now and leave your life of sin.”

Everyone else wanted to condemn that woman and stone her to death, but Jesus had compassion on her. He saw that she was lost and broken and needed saving. And yes, in that moment, as she sat there quivering, feeling completely lost and alone, Jesus accepted her into His family. But what He didn’t do was tell her that it was okay for her to live the same life she’d been living.

Instead, Jesus told her, “Go and leave your life of sin.” He saw that she was broken, He accepted her, He forgave her, and then He asked her to change her ways.

The man from whom the demons had gone out begged to go with him, but Jesus sent him away, saying, “Return home and tell how much God has done for you.” So the man went away and told all over town how much Jesus had done for him.

The story of the demon-possessed man is one that really grabs my attention because he begged Jesus to take him with Him. But Jesus told Him instead to stay behind and preach the gospel. It wasn’t that Jesus didn’t want Him to come or even that Jesus didn’t want this man to change. Instead, He realized that this man would be a huge blessing to the people around him – the people who had seen him when he was possessed.

Yes, Jesus asked this man to stay behind, but He only did it because this man was now a new person through Jesus. People would be able to recognize that.

After this, Jesus went out and saw a tax collector by the name of Levi sitting at his tax booth. “Follow me,” Jesus said to him, and Levi got up, left everything and followed him.

At this point in time, tax collectors were not very popular people. Sure, they made good money, but they did this by being deceptive and overcharging the other Jews. When Jesus called Matthew (Levi) to follow Him, He was asking him to leave behind that dishonest yet comfortable life. By leaving his post, Matthew was leaving that life behind.

See, Jesus might accept us the way we are, taking us in when we are still covered in sin. But there isn’t going to be a time when Jesus will say that He wants us to stay the way He found us – the way we were when we let Him into our hearts.

Instead, He walks into our hearts, toolbox in hand, ready to make whatever changes are necessary. But we have to be willing to help Him out as well. We have to be willing to accept the changes Jesus is making in our lives. If he paints a wall blue, we shouldn’t try painting it black the second He moves on to the next wall. If He’s patching up the wall in the ceiling, we shouldn’t question why it’s absolutely necessary that we fix that leak today.

Honestly, this is so much easier said than done. Letting go of my sinful tendencies is such a big struggle some days. (Okay, let’s be honest – every day.) Remembering how much Jesus loves me and wants me to follow Him isn’t always a walk in the park. That’s why it’s a choice we have to make every single day. Every day, we have to ask God to take over and help us be the type of people He wants us to be.

Even as I type these words, I don’t feel competent enough to talk about living a life for Jesus. But that’s what I’m trying to do every single day. I’m asking God to enter my heart and work in me. I hope you are, too.

*All verses cited are from the New International Version